This is a blog about a car.  Not just any car, mind you, but a car that is as dear to me as any material object I’ve ever possessed.  This is a blog about my 1974 Chevrolet Vega.  Most people mistakenly believe that I’ve owned my Vega my entire life; that it was somehow passed on to me at birth; that we were destined to go through this life together.  Some of that is because I’ve had so much success in it on the race track, and because it’s been the one constant vehicle in my racing operation.  Some of it is probably because many people know that my father raced a Vega of his own in my youth; it’s the car that really introduced me to the sport of drag racing.  But it’s not the same Vega.

My Vega came into my life in 2004.  I was 23 years old and had been racing on some level for 11 years.  The car was originally built by Don Hardy, who built most of the Pro Stock cars of that day, in 1974.  It got cut up and made into a racecar when it was just off the showroom floor.  Though Hardy specialized in Pro Stock chassis, it is my understanding that my Vega was originally built for Modified eliminator (in fact, it still has the Hardy Race Cars tag, labeled “Modified” from 1974).  It also still has the Don Hardy Race Cars seat cover; just another reason the my Vega is, in fact, cooler than yours!

It’s my understanding that the Vega was originally a ladder bar rear suspension, A-arm front suspension machine, but it’s incurred several resurrections over the years.  By the time it came into my life, it was a 4-link, strut machine.

The man who I purchased the car from, my good friend Blake Allen, gave me some history on the machine (I didn’t particularly care at the time, now I wish I had paid more attention).  The highlights: my Vega has earned national event victories in three different sanctioning bodies (NHRA, IHRA and AHRA).  And it’s done so in a variety of classes and categories: Modified, 10.90, 9.90, and supposedly some crazy bastard not only entered it in an 8.90 category, but won at that speed.  I love my Vega as much as any material possession you can imagine.  But I have no desire to run 8.90 in it.  Kudos to that dude.

How I came into my Vega is a funny story in and of itself.  In early 2004, I won the weekend points championship at a 3-day race at Montgomery Motorsports Park, called the “Fistful of Dollars.”  The weekend points champion earned a rolling dragster from Miller Race Cars.  It was actually a solid suspension car if memory serves me correctly, and it featured the most god-awful puke brown powdercoating I’d ever seen.  I didn’t have much use for the chassis, and I hated the color, plus I had just purchased my first home.  Cash seemed much more valuable than a dragster chassis, so on the sale block it went immediately.

Fortunately for me (and my relationship with this Vega), I had pocketed some money at the “Fistful of Dollars.”  Better yet, a week or two later I had a huge windfall at the Tenn-Tuck event in Bowling Green.  There, I won the first $10,000-to-win event on Friday, sat through a rainy Saturday, then won again in the final $10,000-to-win event of the weekend on Sunday.  That influx of cash made the option that Blake would present me viable.

A few weeks later, my aforementioned buddy Blake Allen called.  He was interested in the dragster, and wanted to know if I’d trade for a Vega of his.  My first thought (I think I actually verbalized this to him): “What the hell do I want with a Vega?”  But he sent me a bunch of pictures of it.  And I kind of fell in love.  It was simple.  It was a turnkey race car.  And it was pretty affordable.  We ended up reaching an agreement.  I got the Vega, turn key with a 350 (it ran 6.40’s).  He got the dragster chassis and $3,000.  Suddenly, I was the owner of a Vega; and I legitimately had just $3,000 of my own money tied up in it.

At the time, I owned a dragster of my own (the car I’d had success in at Montgomery and Bowling Green), as well as a ’76 Nova that I had run in 10.90, as well as top bulb and Footbrake bracket events.  I liked my Nova.  I really had no desire to get rid of it.  But I was also open-minded.  I figured I’d race the Vega a few times and see how I liked it, then decide which of the two door cars I would keep and which one I would sell (initially, I leaned toward keeping the Nova).

The first time I race the Vega was at Hub City Dragway in Hattiesburg, MS.  I won a $2500-to-win top bulb race in it.  Suddenly, that $3,000 investment was looking pretty good; and it was essentially paid for.  The rest, is kind of history.

Over the course of last 12 years, my little Vega has gained a sort of cult following.  Partially, I think, that’s because it epitomizes the very basic premise of bracket racing: that you don’t have to have the most expensive or most beautiful car to enjoy success (it’s certainly never been either).  Partially, I think it’s become a revered machine because my exploits in it have been well documented, and they haven’t always been pretty.  It’s done some massive wheel stands (and landed harshly, necessitating major repairs).  It’s had several aborted runs due to crazy and less than straight wheelies – it is, after all, a Vega.  About a year and a half in, I decided that the McDonald’s theme paint job (when I bought the car, it was yellow, blue and red) just wasn’t me.  One day, one box of tide, one package of scotchbrite, and about 6 cans of Krylon later, it was flat black (still the same coat of paint it features today). 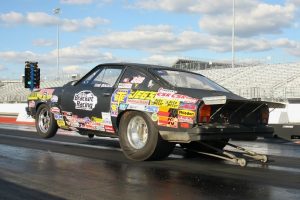 But most of all, I think the Vega has it’s following because for a stretch of about 8 years, I’m not sure any car went down the race track more often, or saw more win lights, than my Vega.  It’s been driven by some of the biggest names in our sport: Troy Williams, Jr., Gary Williams, Adam Davis, Brad Plourd, Stephen McCrory, Brian Folk, Peter Biondo, and Bryan Robinson, just to name a few.  I’ve won over 100 races in my Vega.  Together, we won the 2007 DragRaceResults.com Series Sportsman (Footbrake) World Championship.  It carried me to my deepest finish in the Million Dollar Race, a quarterfinal loss to Tommy Plott back in 2008 (we also runner-upped in the $30,000-to-win event the next day).  In 2006, we were runner up to Scotty Richardson in the first World Footbrake Challenge, which paid $50,000-to-win.  That race was a life-changing moment for me.  With the $20,000+ that I won, I came home and paid off all of my debts, allowing me the financial freedom that eventually led to a successful and fulfilling career racing for a “living.”  Years later, we were in another $50,000-to-win final, in 2012 at the Great American Bracket Race in Belle Rose, LA where we once again came up short to Gary Williams.  In our 12 years together, we’ve won races in top bulb, bottom bulb, and pro tree competition; from Bradenton, FL to Tucson, AZ; and Mobile, AL to Charleston, IL and so many spots in between. 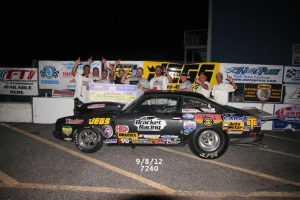 Don’t get me wrong, my Vega isn’t as legendary in sportsman racing circles as Dan Fletcher’s Camaro, or the Bertozzi/Underwood Camaro, or even Ricky Jones’ Camaro; it hasn’t won as many prestigious events or as much money as any of those cars have on the track.  But it’s been a race car since 1974, and it’s won a lot of cool stuff.  While it doesn’t have the accolades of those cars, I think you could make the argument that it may have as many individual event wins as any of them (with the possible exception of Bertozzi’s Camaro).

The reason for this blog isn’t to detail the life of my Vega (although I did some of that here, and will likely do more in the future) as a retrospective, but to turn the focus on its future.  For 12 years, my Vega has been largely neglected, at least in terms of physical appearance.  It’s always been a great car, and for the most part, I’ve kept it technologically and mechanically sound: it’s always had excellent equipment bolted between the frame rails.  But a show piece, she is not!

I’ve given my Vega the 2017 season off, and it’s going to take on a complete rebuild.  Within this blog, I’ll do my best to document the Vega Resurrection.  Stay tuned to details on the teardown, the updates, and eventually the rebuild!

All Posts »
NextGetting started on the chassisNext